A haircut with a difference raises over £1400 for Macmillan Cancer Support!

The Hampshire Bowman pub landlord honours predecessor with his post-lockdown haircut in memory of the former landlady.

Mark Newman, the Hampshire Bowman’s landlord for eight years, decided to turn his long awaited haircut into an event, raising hundreds of pounds for charity in honour of Heather Seymour on Sunday, August 9. Heather was the landlady of the Dundridge pub from 2002 to 2012; she spent over two years battling lung cancer and died at the age of 63 on May 1.

She was ‘a brilliant landlady’ according to Mark. The 35-year-old said: ‘The Hampshire Bowman was my local – I have been coming here for 33 years. I also worked as assistant manager with Heather.’ ‘She was a good old fashioned landlady – she welcomed everyone.’

A crowd of more than 100 gathered at the pub to watch Mark’s charity head shave, with raffle winners manning the clippers to cut a strip of the landlord’s hair.

Mark said: ‘I hadn’t had my hair cut since before Christmas. I was due a haircut the day the government shut the barbers’ The dad-of-two (nearly three) praised the fantastic support of regulars for helping to pub survive the national lockdown and beyond. He said: ‘During lockdown closure we had two regulars post an envelope with £50 and a note saying ‘look after yourself and your family.’ ‘The locals have been fantastic – we’ve seen a lot of loyal faces return.’

The shave raised more than £650 and a charity bottle was another £764 – all funds raised for Macmillan Cancer Support. Thank you everyone for your support, also to Kieran from Outlaw Barbers of Bishops Waltham.

Regulars and newcomers will find the Hampshire Bowman has restricted its indoor service so to concentrate on its outdoors service – taking advantage of the pub’s large pub garden that can accommodate more than 400 patrons.

Any cookies that may not be particularly necessary for the website to function and is used specifically to collect user personal data via analytics, ads, other embedded contents are termed as non-necessary cookies. It is mandatory to procure user consent prior to running these cookies on your website. 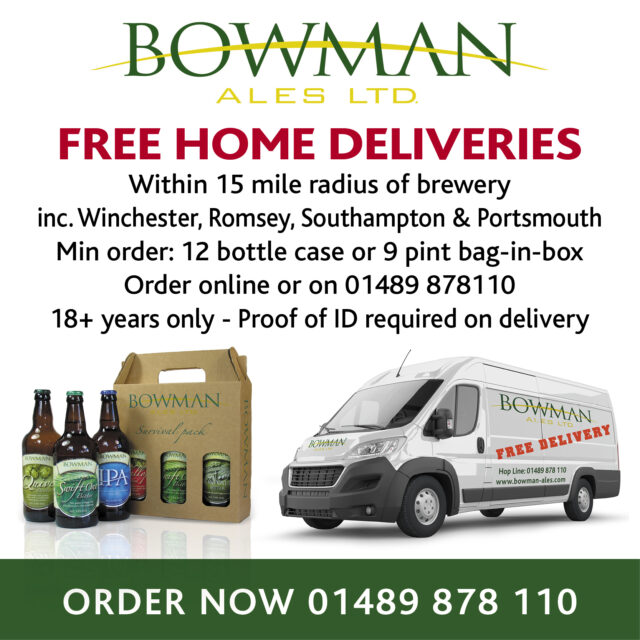 Within 15 mile radius of the brewery, including Winchester, Romsey, Southampton and Portsmouth
Minimum order: 12 bottle case or 9 pint bag-in-box
Order online or on 01489 878110